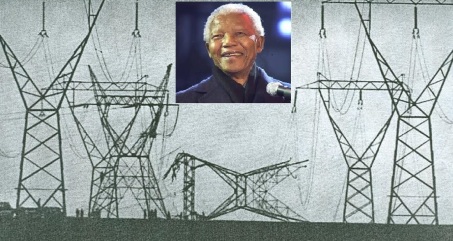 Did yees know that auld Nelson Mandela over dere in Africa was imprisoned by the evil aparthate regime for blowing up a pylon? And we all know what happened to your man after that – the Nobel Peace Prize and getting the title of world champion of the twentieth century. Makes youse think dunnit?

Some of ye lads might be startin to tink we have our own evil regime right here.

I was just after seeing the Mandela fillim “The Long Walk to Freedom” and it showed how he was a lawyer, and tried to live within the law, and followed the rules, but after a while he realised that the laws were so evil that it was impossible to follow dem and be a good person at the same time – one had to choose between good and evil. He chose good and so blew up that pylon.

So then I was thinking what is the law here? The law is called The Strategic Infrastructure Act, and it fecks over the previous planning laws altogether. It says that when the government call something a strategic infrastructure, all the doors fly open and they just walk right in, usually over the dead bodies of good and honest Irish citizens. The same law says that these strategic infrastuctures don’t need to go to the elected County Council first for Planning Permission, they go straight to An Bord Pleanala, and of course we know that the ABP are full of government appointed hoors, falling over themselves to get a sniff of Enda’s backside. ABP now means Arse-Bandit Plonkers.

Me being a blocklayer I thought I must have got this wrong. As a youngfella I was taught that we lived in a democracy. A democracy means the citizens get the last word. Peig couldn’t help me, so I thought I would see for myself. I went up to Portlaoise on the train and got hold of the file on the ABP decision to allow EirGrid to build a substation in Coolnabacca, which is in the Laios-Kilkenny area. The file was thick and took me all day to read it, there were so many representations from the people of the area. They all felt new to the touch – like they were never read before.

Jaysus wept. They call it a sub-station. There is nothing sub about it – it’s a feckin Super-station with 17 bays which means 17 high-power (400kV) lines comin in: Connections to a lot of wind farms, any fool can see that, it’s as plain as da tits on a monkey.

Eirgrid said it was for the upgrade and extension of a 110 kV line to Kilkenny and the ABP agreed with them. Evidence was led by the local people that it was to connect lots of wind farms – the evidence was a letter from Eirgrid in 2009, where the Project Manager says “the substation is for the future connection of renewables (windfarms)”. That seemed pretty clear to me: Eirgrid were talking bollocks with their story of a line extension, but that was ignored by your man from the APB.

When they realised their Environmental Impact Statement was dodgy, Eirgrid asked to amend it there and then in the hearing, without giving the people time to respond, and your man from APB allowed them, saying it was ‘within his remit to do so’. Your remit needs a refit methinks. In the bad old days we’d be lookin for the brown envelope – but this is just too daft to be bent, and having shit for brains is not a crime.

Anybody, even a blueshirt with half a brain, can see that feckin Eirgrid will use this super-station to connect the wind-farms in the Counties of Kilkenny, Laois, probably Wexford – 17 wind farms is a lot of wind farms – they said so in their letter. Hundreds of good folk trusted An Bord Pleanala to see through this obvious lie and banjax the whole mess, but the ABP just became part of that lie and let it go ahead.

This is when good people, who have obeyed the law their whole life, come to that point where your man Mandela was at when he said – the law is fecked-up evil, I cannot stand by and let it go on. You would understand if some yoke felt desperate enough to do something silly – please God that never happens. It is up to this regime to show the people it is not evil and stop this madness – now.